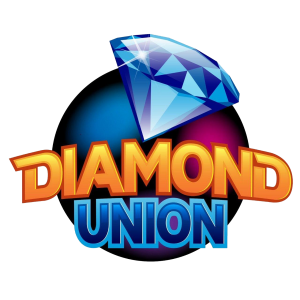 If you play poker online in a PokerBros club, you've probably been asked if the club you play is in the Diamond Union. If you already know the answer to this question, this post is not for you. But if you aren't sure what the Diamond Union is or even what a union on PokerBros is at all, read on and everything will be explained!

What is a Union on PokerBros?

A PokerBros union is a group of two or more clubs that share player pools with each other. This mean that the players from all the clubs in a union can play against each other, both in tournaments and at ring game tables.

Why would any club want to be in a union? Because with a larger player pool, the union can run more games than any individual club could run on their own. This gives every clubs' players more opportunities to play than they would have if the clubs each ran individually.

PokerBros currently allows up to 75 clubs per union. So it is important to realize that your agent or club manager may not know all the players at your tables when you are playing.

The individual clubs within a union usually have no or little control over the games offered in that union. Typically a union will employ a table manager. The manager is responsible for deciding which games and tourneys are offered and for maintaining the tables. Clubs can often make suggestions or requests through the table manager but there is no gaurantee they will be approved.

How do I know if I'm playing in a Union?

It can be a little difficult to tell if the club you are playing in is a member of a union and if so, which union. You can always ask your agent or club manager but there is an easier way. Just open any ring game table in your club's lobby and look at the text in the center of the table:

The union name (if the club is in a union) is next to the table name in paraenthesis. For example, the table in the screen shot above was running in the Diamond Union.

Something to be aware of is that two clubs who are members of the same union will have identical game lobbies. You will see your club's icon and banner but the tables offered will look exactly the same for any club in that union. You may have noticed this if you have ever joined a new club only to find they offered the exact same games as your previous club.

If you are wondering why you would play in one club over another club when both clubs are in the same union, that issue is covered in our PokerBros app guide.

What is the Diamond Union?

The Diamond Union is the first major union ever formed on the PokerBros app and it's currently the largest. They have the most ring game traffic of any union, nearly doubling the traffic of the second-largest union.

The Diamond Union has the reputation of having the softest games and the most recreational traffic of all the major unions on PokerBros.

The Diamond Union administration maintains a high-quality standard for all the clubs they accept into the union. Accordingly, there have been very problems with any clubs in the Diamond Union.

How do I play in the Diamond Union?

If your club is not in the Diamond Union and you want to check it out, try searching for "PokerBros Diamond Union Clubs" on Google or social media. You will definitely get some options this way, just remember to exercise caution when playing in a new club you find online!

Copyright 2022 • BSB Poker
PokerBros is an online social gaming platform and does not provide any real money service.
PokerBros is not a sponsor of or in any way involved with this promotional activity, nor does PokerBros endorse it.